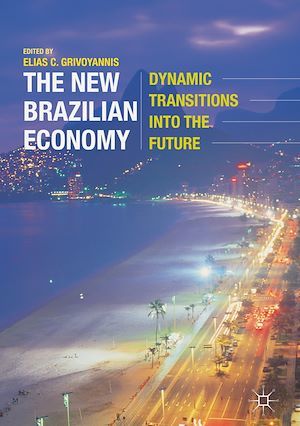 Brazil is the most populous economy in Latin America today with the second highest GDP among the emerging BRIC economies, after China , and the second per capita GDP among the BRIC economies after Russia . The objective of the proposed book is to provide a thorough historical, statistical, and institutional description of the Brazilian economy along with a most recent account of what is presently going on in Brazil and the type of economy from which Brazil is emerging. The topics addressed in this book will increase the reader's awareness of the institutional economic and cultural forces that shape the dynamism of the Brazilian economy today and will continue to do so for the years to come.

Some of the questions that this book will address are: How did the Brazilian economy evolve into what it is today? How does the Brazilian economy affect the developing and industrialized countries and why should the present state of the Brazilian economy be of any interest or concern to the rest of the world? How is the Brazilian banking sector evolving and what role do private banks and finance play in this change? How do the demographic changes in Brazil interact with capital accumulation and influence sustainable socio-economic growth? What accounts for consumption inequalities among Brazil's population? What processes are responsible for the current distribution of income in Brazil? How is the recent economic crisis of industrialized countries expected to affect Brazil's economic stability and long term growth? How are the policy makers in Brazil dealing with international and domestic economic challenges? Those who study multinational enterprises and the future of their direct investment in Brazil will learn about the existing types of government intervention which will continue to play an important role in the future economic growth of the country. They will also gain some understanding of Brazilian antitrust policy and the international implications of Brazil's transition into an emerging world economic power.